Angel Delgadillo has a very special relationship with the road called Route 66. He was born in his family home on April 19, 1927 on Route 66 when the roads from Chicago to Santa Monica were first being connected to form the newly created “U.S. Highway 66”. He grew up in that house with his 8 siblings, using the lights of the nighttime Route 66 traffic streaming through town to make a game of chasing shadows. When the Great Depression hit Seligman, the Delgadillo family was able to stay in their home town because Angel’s older brothers, Juan and Joe, got jobs playing music for dances in the towns along Route 66 in Northern, Arizona. As a teenager, Angel experienced World War II by watching all the convoys of cannons, jeeps, and trucks drive through Seligman on Route 66. Then when Angel became an adult and decided to take after his father, Angel Delgadillo Sr., by becoming a barber, he attended the American Barber College in Pasadena, California which just happened to be on California’s section of Route 66. For his barbering apprenticeship, he completed that on Route 66 in Williams, Arizona. Then in 1950, Angel opened his barber shop in the same building his father had opened his barber shop and pool hall on Route 66 in 1922, before the road even had its now famous name. And yet, all of these connections are not the reason that the name Angel Delgadillo and Route 66 go hand in hand. It is just the beginning of Angel’s Route 66 story.

In 1972, Angel moved his barber shop location so that he could take advantage of the traffic on the new alignment of Route 66 through Seligman. He moved his barber shop fixtures, including his father’s 1926 barber chair, and 3 pool tables to the new location. For six years, Delgadillo’s Barber Shop and Pool Hall, along with the other Seligman businesses, enjoyed the commerce that the 9,000 cars Route 66 brought through town each day. During this time there was so much traffic that Angel would sometimes have to wait 10 to 15 minutes before there was an opportunity to cross the street to walk home from work.

After being reliant on the traffic Route 66 brought through town it was very distressing to the community when on September 22, 1978 the stream of cars completely stopped. It was this day the newly constructed Interstate 40 opened just two miles south of town. The livelihood of Angel’s barber shop and all the other businesses in Seligman disappeared in one day. Angel remembers feeling that on that day “the world forgot about us.”

It was easy for the world to forget Seligman with the signage on the new freeway all but forgetting to mention Seligman. One day driving down from Flagstaff, Angel’s brother, Juan, noticed a lack of interstate mileage signs noting the town of Seligman even existed. On further inspection, Angel and Juan found that in fact, on the 75 mile stretch from Flagstaff only one sign prepared travelers for a possible stop in Seligman. This one sign was only 16 miles from Seligman, which was after Ash Fork, where travelers had likely gassed up and eaten already, if not before. Angel was furious at this realization. He insisted on having a meeting with the officials responsible for this and made a large diagram showing the obvious lack of signage for his town. By doing so, Angel succeeded in getting Seligman on four more of the mileage signs between Flagstaff and Seligman.

But even with the increase in signs, traffic through Seligman was sparse and business was lean. Angel and his wife, Vilma, had four children and were constantly struggling to survive. They could not afford to leave Seligman and, like many of the other residents, they were constantly thinking of ways they could possibly improve the economy. Or as Angel put it, “a way we could put beans on the table!”

Over the years, Angel would talk to travelers who would reminisce about their travels on Route 66 years before. Angel kept hearing the same stories. Either their parents had driven them on Route 66 when they had moved to California during the 30s and 40s or on family vacations in the 50s and 60s. All the stories included fond memories about the heyday of the old road. The more Angel heard of the nostalgia they had for Route 66 and the days of leisurely road trips, he decided this might be the answer to Seligman’s problem. Route 66 was obviously a piece of American history that people missed, so why not bring it back as a historic highway?

Angel’s thought was that if the State of Arizona made Route 66 a historic highway travelers would be reminded of the option of a slower, nostalgic, and more scenic route that meandered through the small forgotten Arizona towns. For years Angel talked about his inspiration of getting the old road designated a “Historic” highway but interest was limited and many felt that a barber from a dying community had no hope of persuading the State of Arizona to do such a thing. But Angel grew up during the Great Depression and was raised to not give up. He considered his mission to increase travel through Seligman a fight for the survival of his family and community.

Angel and Vilma drove down Route 66 to Kingman and visited the businesses along the way to see what they thought of his idea to make Route 66 a historic highway to promote travel through their towns. One after another, the business owners agreed that it was a good idea and said they would help with the cause. Angel called a meeting at the Copper Cart restaurant in Seligman on February 18, 1987 to organize a group to promote a Historic Route 66. The meeting was comprised of Angel and 15 other people from along Route 66 in Northwest Arizona and resulted in the founding of the Historic Route 66 Association of Arizona, the first group of its kind. Angel was elected President, John Layman of Seligman was elected Vice President, Jerry Richard of Kingman was elected Treasurer, and Dave Wesson of Kingman was elected Secretary. The four officers of the Association, along with Juan, Angel’s brother and owner of the Snow Cap, worked very well together and were all very passionate about the cause.

The Association’s headquarters was based out of Angel and Vilma’s Barber Shop and Pool Hall in Seligman. As interest in the cause and Route 66 nostalgia grew, people started to want Route 66 merchandise. To support the Historic Route 66 Association, Angel and Vilma started selling a few pieces of Route 66 memorabilia out of their business and by doing so established the first Route 66 gift shop in existence.

Through a dedicated letter- writing campaign, the Association explained to the State of Arizona the plight of the Route 66 towns and of tourist interest in Route 66. Eventually, the State informed the Association that the counties involved needed to bring up the quality of their sections of the old neglected road to the state standard before they would consider deeming it a historic highway. After doggedly lobbying the county boards of supervisors for the counties of Mohave, Yavapai, and Coconino, and the Arizona legislature, the Association reached success. In November of 1987, the State of Arizona christened U.S. 66 from Seligman to Kingman as “Historic Route 66”. Soon after that, the section of Old Route 66 to the east of Seligman, and the stretch from Kingman to the California border was also named part of the historic highway. By making the road historic, Arizona preserved 159 miles of the road which is the longest remaining stretch of uninterrupted Route 66 in the country.

On April 23rd and 24th of 1988, the Historic Route 66 Association of Arizona held a dedication of the newly historic road. The Historic Route 66 Fun Run Car Rally and Show had a total of 153 cars register to drive Route 66 from Seligman to the California border and participate in the events in Seligman and along the route. Bobby Troupe, author of the famous Route 66 song, “Get Your Kicks on Route 66”, attended the event as well as Will Rogers Jr. who gave the dedication, and Arizona Governor Rose Mofford. Music was performed by Angel’s family band, The Delgadillo Orchestra, as well as The Dick Clark Band, The Surfaris, and Brother John. Governor Mofford cut the ribbon on Saturday at 10:00 a.m. at the east end of town letting the starting line-up of 153 cars off to get their kicks at the events along the new Route 66.

The event was enjoyed by everyone so much that due to participants’ requests an annual event was established. Since then, a Fun Run beginning in Seligman has occurred every year and now has 800+ cars registering each year. But people are not coming to Seligman just once a year for the Fun Run to celebrate Route 66. Now travelers stop in Seligman every day of the year. Route 66 popularity has had an incredible resurgence and along with it, Seligman. To many, Route 66 represents the heart of American culture, and Seligman, the heart of today’s Route 66. Americans are again enjoying the scenery and nostalgia of the old-time road trip and take pleasure in coming to Seligman to see the hometown of Route 66’s rejuvenation as a historic highway. Busloads of international travelers stop in Seligman to see a town that embodies the old-fashioned American town they have traveled so far to experience.

Angel has received much national and international exposure for his part in saving a piece of history and for increasing tourism. He has been honored by the Arizona Speaker of the House, the Arizona State Governor, the Arizona Historical Foundation, and numerous Route 66 associations. Angel and the Delgadillo family are featured in an exhibition about Route 66 at the Smithsonian National Museum of American History. He has been nicknamed “The Mayor of the Mother Road” and “The Guardian Angel of Route 66”. Songs have been written about Angel and he has been featured in hundreds of magazine and newpaper articles all over the world. Millions of viewers have watched him in popular documentaries such as Billy Connelly’s Route 66. He has been interviewed over one thousand times. His interview with John Lasseter from Pixar, helped to create the story of the town Radiator Springs in the movie “Cars”.

Even with all the attention he has received Angel is still genuinely happy for every visitor that graces his hometown. He delights in the joy he has given to the travelers of the world by preserving the piece of American history called Route 66. He loves to visit with the travelers who have come to Seligman specifically to meet him, and enjoys telling the saga of Seligman and Route 66 to those who are hearing it for the first time. He uses his own story to encourage people to not give up when faced with challenges and reminds them that one person can make a difference in the world. Angel still occasionally gives shaves and haircuts at his business which is now a unique blend of barbershop, Route 66 gift shop, museum, and visitor’s center. For those who know the story of Historic Route 66, Seligman is not just a stop on their way to somewhere else, it is a destination. People come from all over the world to meet the man who, in an effort to save his town from economic collapse, inadvertently spearheaded a triumphant national and international interest and revival of Route 66 and made Seligman “The Birthplace of Historic Route 66”. 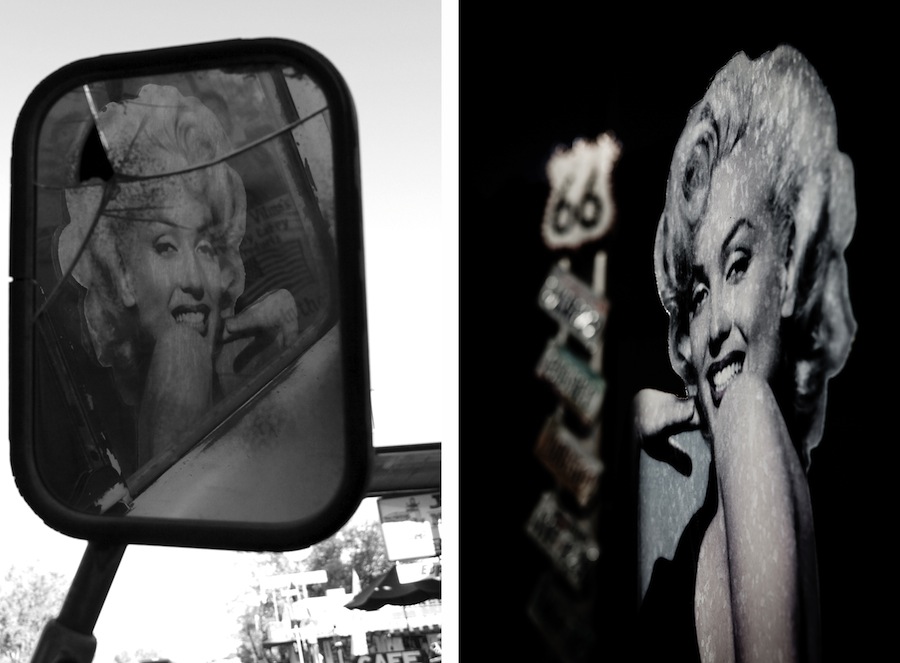 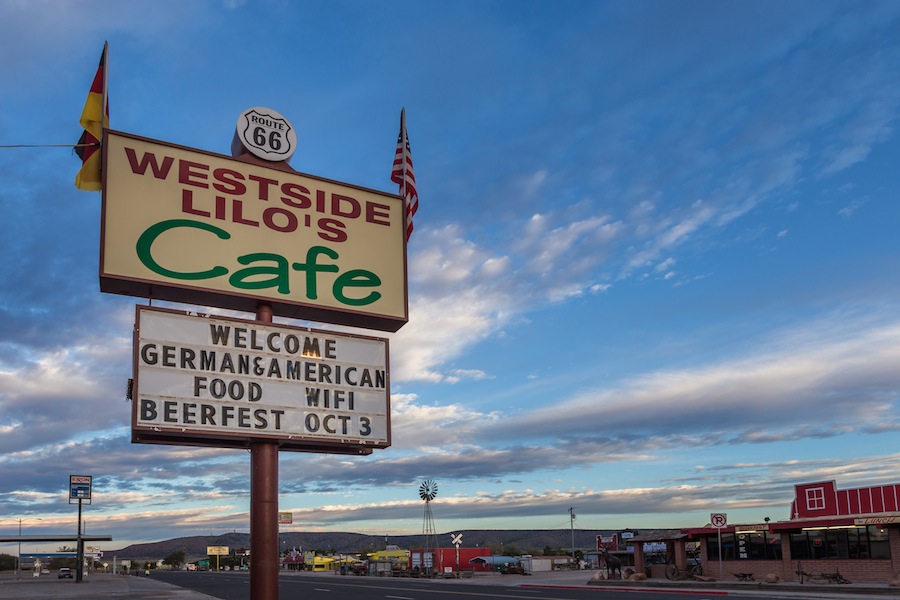 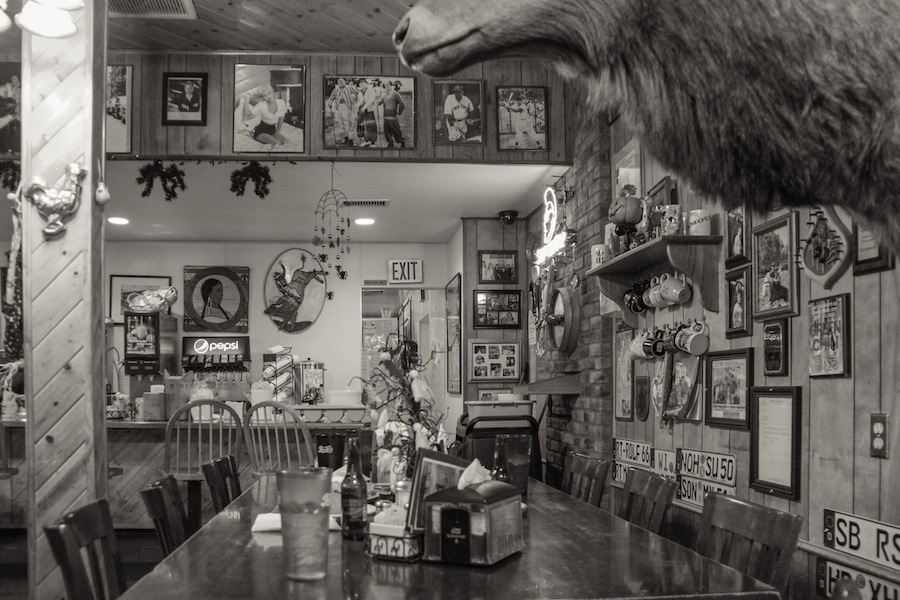 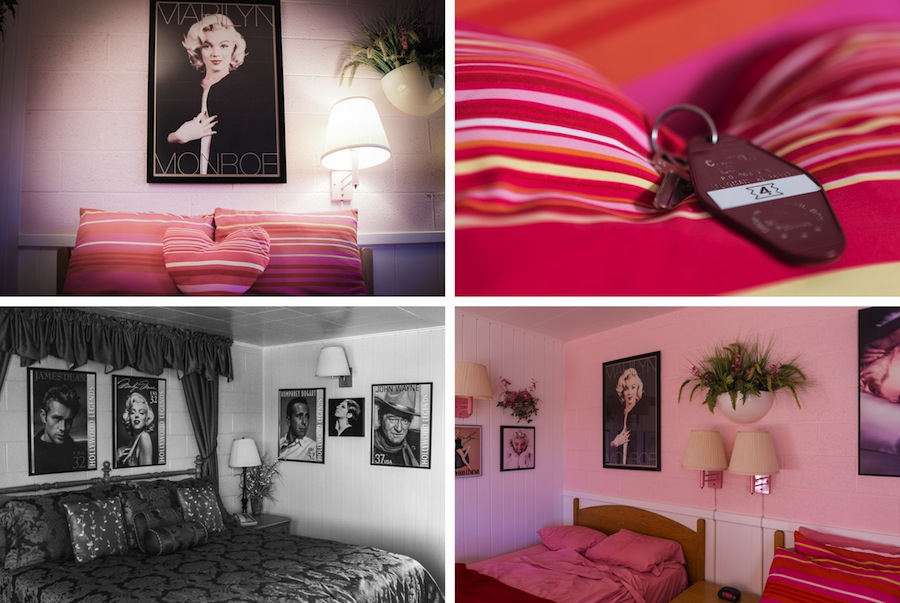 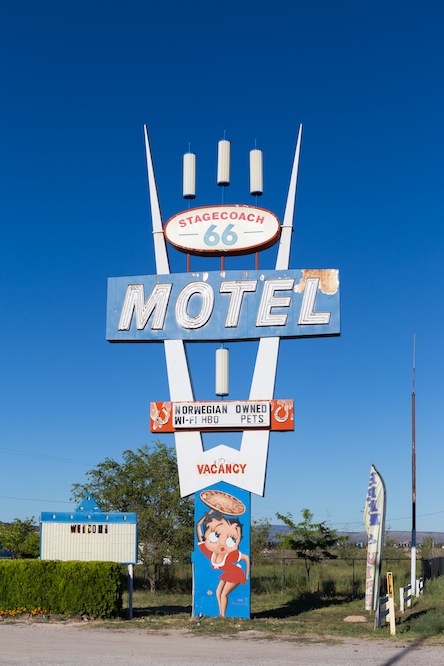 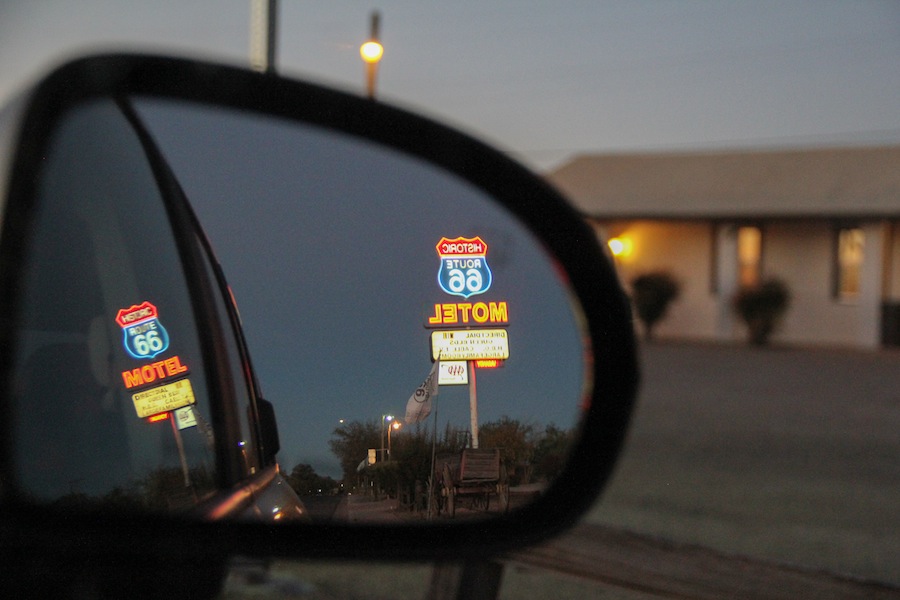 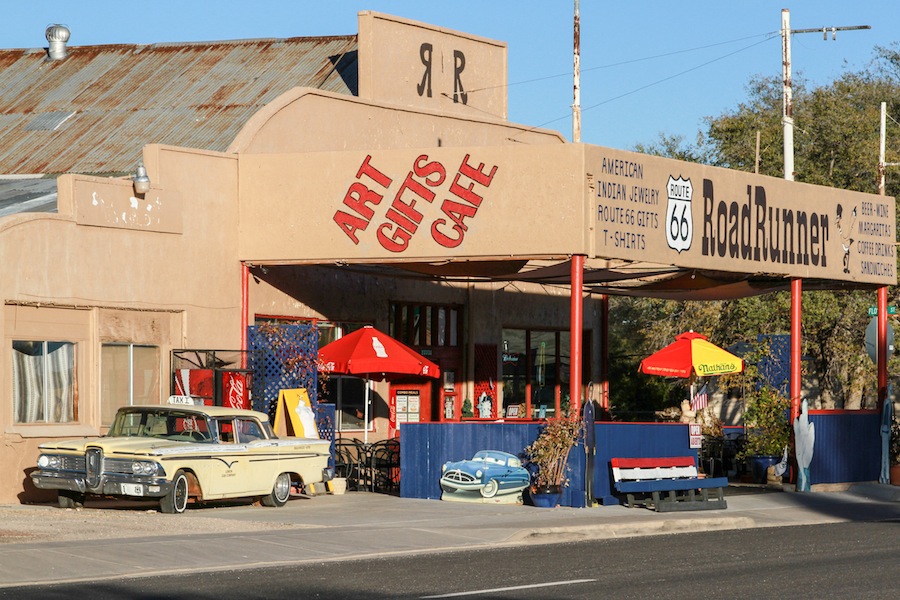 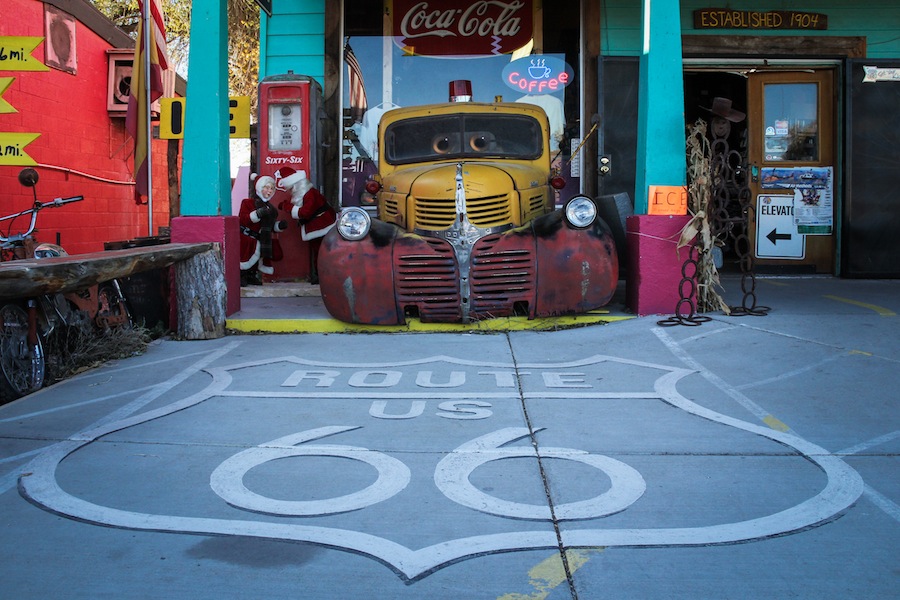 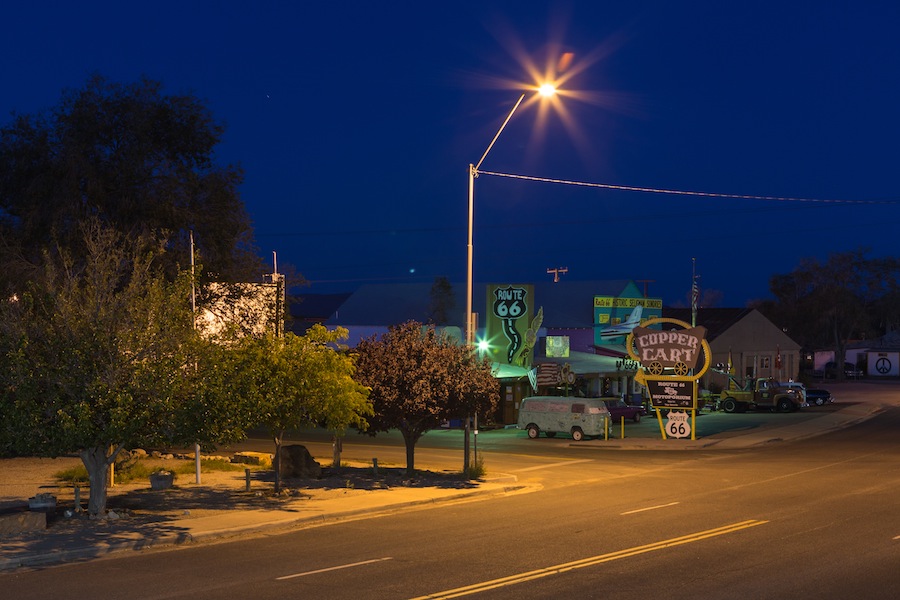 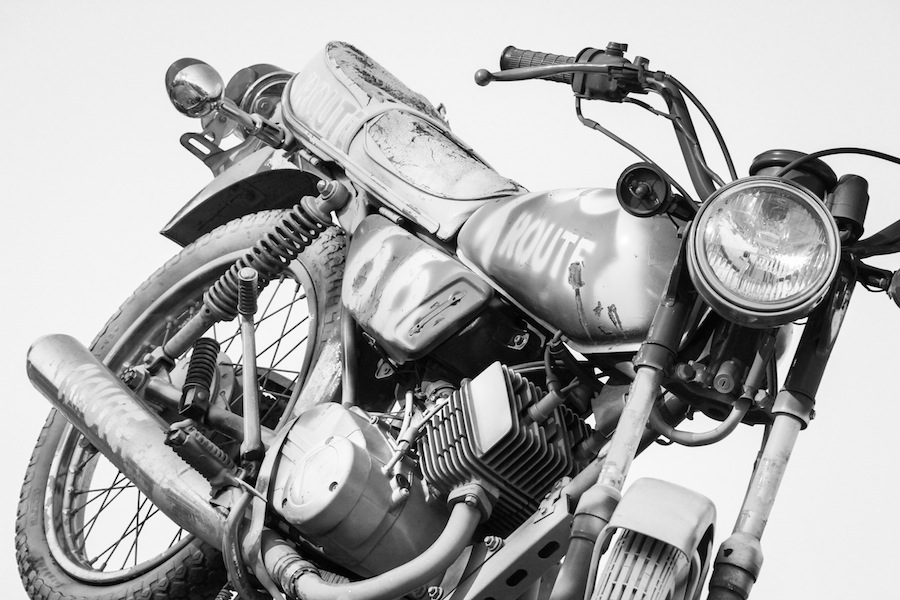 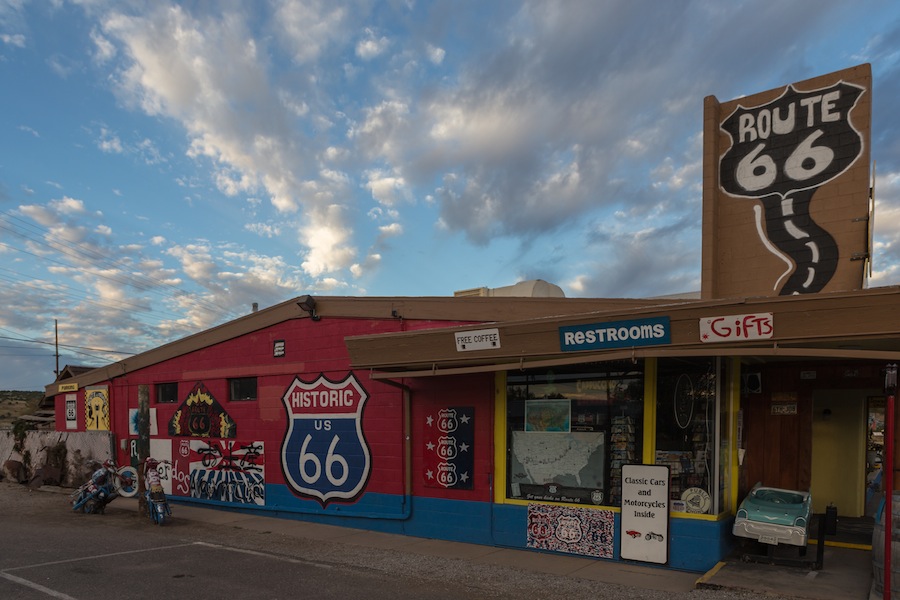 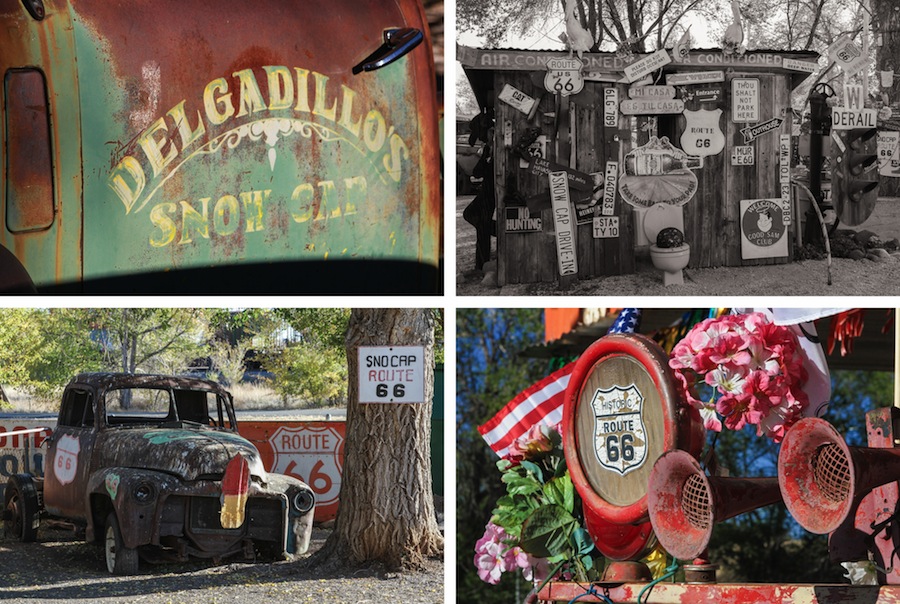 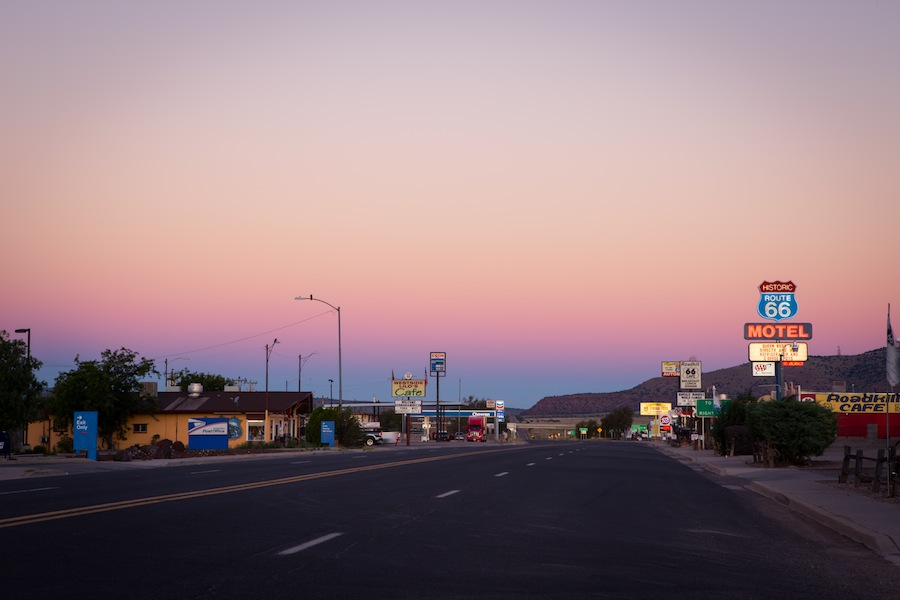